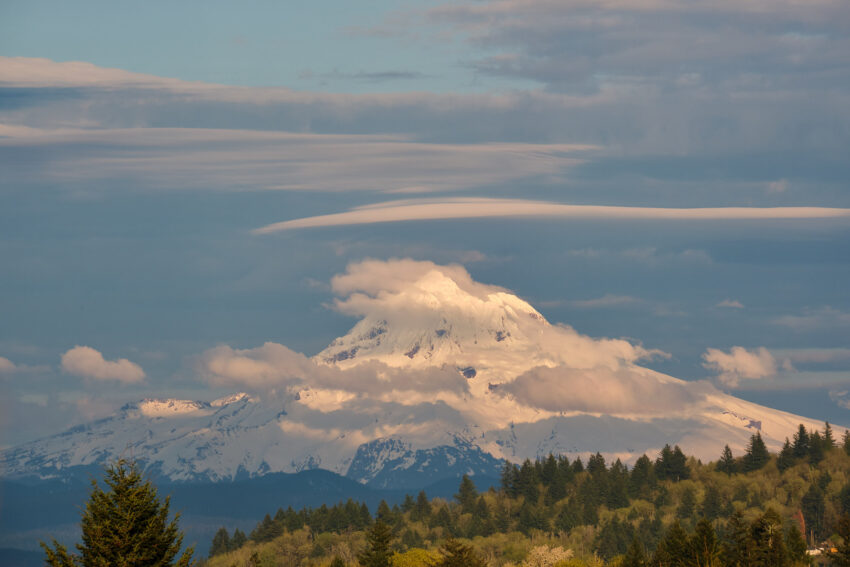 A few weeks ago, I was using TPE (The Photographer’s Ephemeris) on my phone to get ideas for photos to shoot. It seemed like a full moon rising over Mt Hood would be a great idea but weather might not cooperate this time of year. I was expecting rain or complete overcast but hoped for mostly clear skies.

What I got instead was a great learning opportunity.

According to TPE, I should be able to stand on the summit of Powell Butte to see the moon coming over Mt Hood by 7:36pm, plus or minus a few minutes for moon placement.

As I was setting up, I did notice the tip of Mt Jefferson poking out over the horizon. Not bad for being over 70 miles away.

As I got my first shots, I started to take mental notes as to what I could have done to make my experience better. Did I have the right f-stop? Are there other options I should have set on my camera before even pointing it at the mountain? What am I framing? and so on.

I had to fumble with the mounting plate to get it onto the foot of the 100-400, and dig around my bag looking for batteries, where did I put that duster? a comedy of errors.

Within 30 minutes of starting my attempt, the sun started to set and darken the lower part of the horizon with shadow. But, at the same time the clouds that covered the mountain had started to clear! There were a couple of times I thought I could see some climbers, but that was just wishful thinking.

Ultimately, I settled on this image being my best of the 50 that were taken in the 40-ish minutes I stood looking like a newbie. I liked how the shadows of the clouds were clearly shadowing the mountain sides, whips of cloud climbing revines, and lenticular formations constantly swooping side to side at higher elevation.

As the mountain became hidden by the shadow of the horizon, I decided to call it a night. Definitely no moon shot today. I’ll have to try again some other month.

What did I ultimately learn from this attempt?

What do you think? Did you learn anything? Did I capture Mt Hood?