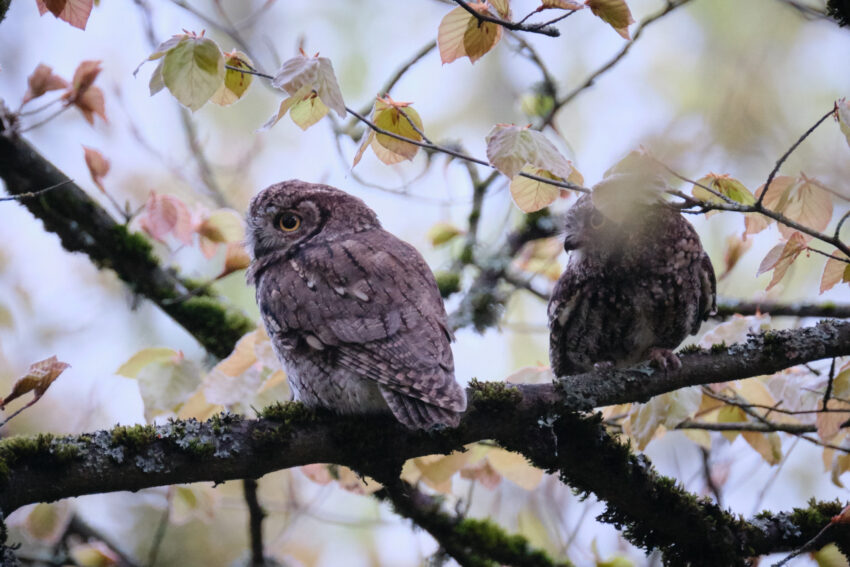 I rented a 100-400mm lens for my Fujifilm X-T3 specifically so I could get some good photos of some owls that we found on Mt Tabor. During the week that I shot with it, I learned a LOT about the intricacies of not only my camera and lens combo, but more about the behavior of owls, finding them, and capturing a good photo in the dark when the subject doesn’t want to stay still.

What did I use?

First thing I tried to do was photograph some great gray owlets on Mt Tabor. I was a fool to forgot my tripod on this occasion, but was able to squeak out some handheld shots. They didn’t come out as nicely as I would have liked, but it was a start.

Then a few days later, I remembered to bring my tripod to try again. I also spent a fair amount of time getting to learn more about how the lens is focused, adjusted, and what would work better for the situation. I also had to spend some more time with CaptureOne to process the photos.

I also got a much better shot of mama-owl getting a food exchange from the male and proceeded to process a it for the young ones.

What a sight! I got to watch a food exchange, interaction with the owlets, and a revealing shot of the elusive third owlet! Can you see all 4 owls in this pic?

As we were taking pics, we got to talking to a nice couple that was out for a stroll. They shared some info that they always hear screech owls at a nearby church. We decided to get some dinner then investigate.

While scoping out the supposed screech out sites, we started chatting with another elderly couple that happened to walk by and ask if we were searching for screech owls. Yes! They were kind enough to confirm that the two spots we were searching did indeed have some owl activity and we may end up seeing something that evening.

As we waited past sunset, we didn’t see any activity, it was rather dark already and we were motioning to start heading home when we suddenly saw some very close movement.

Audrey frantically motioning to me in her own brand of sign-language “It’s across the street!”

And there it was! At this point, I was struggling to get the bird in focus as the auto-focus system didn’t like how dark it was at this point. I also forgot to bring my tripod from the car, so I ended up sitting on the ground with the lens between my knees in an attempt to stabilize the camera as much as possible. I was also struggling with some settings and manual focus peaking as it was still kind of new to me.

You learn by doing, I guess.

After a few shots, the car traffic and a dog-walker in passing flushed the owl into the night. We vowed to try again the next day.

Monday evening, @tweetsandchirps and I celebrated our 99th-monthiversary together with a nice dinner, some book store browsing, and a terminator stout milkshake at McMenamins. Eager to get back to the owls.

This time, I made sure to have my settings dialed in, tripod ready, and on the lookout for movement.

As it grew into night, we started hearing the tell-tale bouncing ball sounds of screech owls. There’s more than one!

Then, almost on cue, a bird flew out of the nearby cedar and onto the very same branch from the previous night. Yes! My prediction worked!

As I started snapping photos and refining my settings, a second screech flew up to the branch and handed off a rodent to the first. Another food exchange! Alas, it was so dark and exposure so long, and their movements so quick, I couldn’t get them both into focus at the same time. But I’ll take it.

I did manage to get one shot with both sitting completely still, but slightly blurred by a couple of leaves. Dang. Right after this, they flew off after traffic came between us and flushed them out.

Keep in mind, the long 1-second exposure was the only way I could get them in this dark environment. I topped out the ISO at 1600 to reduce any sensor noise, and had it all steady as possible on the tripod. It was such a challenging shot.

We were still hearing the birds, one in a tree and another in a hole in the nearby trellis. There’s still activity and now we could see one of the birds by the hole! The vines complicated the shot, night lights on the property were messing up the metering, and setting up the tripod on very uneven terrain added more difficulty. But after a few minutes of tracking it’s activity and constantly adjusting, I got a couple of pics that made me quite happy.

These two owls were so vocal! This one on the trellis could be seen calling as its movements blurred the shot. This was the only show I could get without that blurred chest.

After I got a few shots and satisfied that they weren’t horrible, we decided to let the owls go about their business. Also, in respect to giving the birds their space and respect, we aren’t sharing the location nor going back any time soon. We want them to thrive and keep coming back year after year.

Alas, these were my final shots with the rented 100-400mm lens. It was great, a learned a ton, and now I want to own one more than ever. Maybe soon.

What did I learn?

What do you think? Ever see some great owls? Advice on getting better night shots or post-processing?