StP. Seattle, WA to Portland, OR in two days, 200 Miles via bicycles.

Friday Night:
Matt met me at the PDX Max station with his bike. We then hopped on the MAX and got off at Gateway TC to get picked up by Kris and Angie.

By 6pm or so we were on the road, heading to Seattle.

After a dinner stop in the half-way point, Centralia, we arrived in Kent just south of Seattle to sleep the night.

Lee and Elizabeth then joined us just shortly after 11pm. 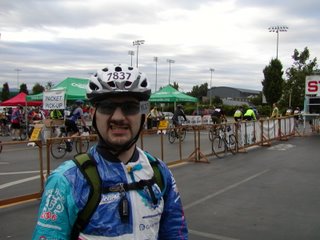 Quite early into the ride, Matt’s rear wheel broke a spoke. Luckily, he had a spare, which we quickly changed out. There was a bicycle repair truck at the pit-stop that we had just passed so we turned around and headed back. Matt was able to get some new spokes as extras then we were off again.

Just before our first major rest stop we saw a fire truck blocking part of the road and railroad tracks. As we rode around it, we were flagged by several volunteers to be EXTREMELY careful crossing the tracks since the surrounding concrete was breaking apart and had just caused someone to wipe-out. I saw him on the side of the road with a bloody face, oxygen mask and a bunch of paramedics cradling his head and tending his wounds. Ouch. 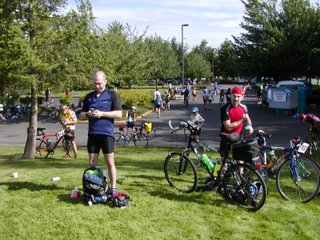 It was a lot of nice riding throughout the day. We got to see some great terrain, wonderful people and just had a generally nice time. It was great being able to ride with friends rather than alone the entire time. 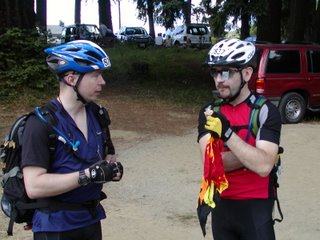 Not even half-way through the day’s ride, we were crusing along in a pace-line with me up front when I was stung in the right bicep by a bee! Ouch! I must have hit it at 20mph. I was kind of freaked out since I don’t think I’ve ever been stung before, but I didn’t have any allergic reactions to it so we continued on our way.

We also some some notable riders like the guy on the unicycle! 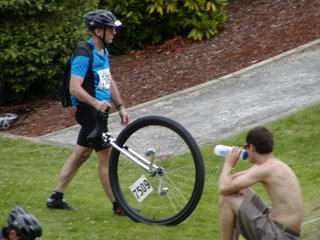 Also, there was a rider on a Big Wheel, a scooter, a bmx bike, and someone said they spotted someone on a skateboard. 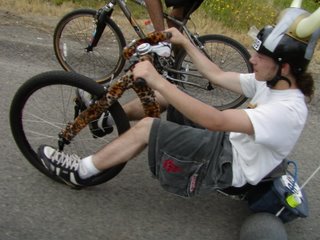 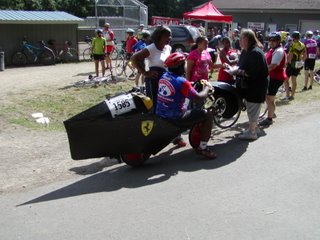 Then we met up with Kris, Angie, and Elizabeth at the halfway point in Centralia. 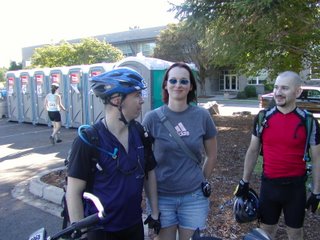 It was a good day.

Lee called at 4:45am to pull out of the ride due to pinched nerves in his wrists. He had been having problems the previous day with numb fingers and toes. I was sad to not have him there on day two, but we had to keep going.

Matt and I booked it at a pretty good pace the entire day with no mechanical or medical problems.

We had stopped a few times to refill on water, use the restroom and have some eats. The longest stop we had was about 30 minutes.

At this stop, we had to put on sunscreen and admire the “World’s Largest Egg” that was made of plaster. 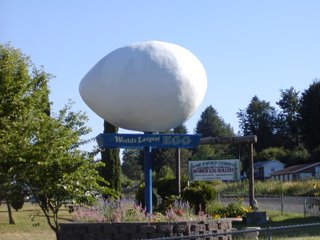 Matt and I periodically ride no-handed to get the pressure off our wrists, eat something while riding, or just to be goofy. 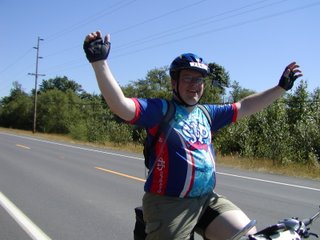 Actually, we were just hamming it up for the camera. 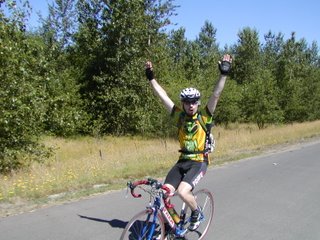 To cross the Columbia River from Washington to Oregon, we had to cross the Long View Bridge. This was a massive undertaking since it is only a two lane bride that sees a lot of large trucks go over it and almost no sidewalk for pedestrians. This was solved by the Gold Wing Motorcycle Club! They would queue up several hundred cyclists at a time then every 10-15 minutes would block traffic and escort us across the bridge. When we started on our way up, we were behind a tandem bicycle that had some speakers on the back and an iPod playing the theme from “Rocky”. That was one of heck of a motivator. 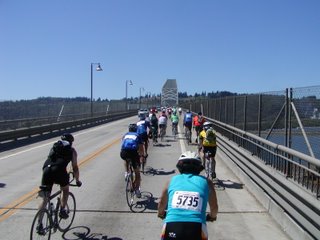 Safely across the river, we picked up the pace a bit and just cruised through Rainier, St. Helens and Scappose with only very short watering breaks.

We even stopped in Scappoose for a Dairy Queen ice cream cone! Wow, did that ever taste good after eating powerbars, cliff bars and gels all day long. Mmmm…chocolate.

We were doing so well, we even skipped the last supported rest stop in favor of maintaining speed and finishing before 5pm.

Holladay park is where we pulled into the rather large festival finish line. The girls met us there along with Lee! I was so glad to see them! But, after walking around the festival for a few minutes and checking out the vendors, Matt and I were beat and we headed off to the car to take us home.

I was actually feeling so good after the ride, I started considering next year’s ride. Maybe do it ALL in one day, then take a car back to the halfway point and ride the second half with Matt on Sunday. Maybe.

My most sincere thanks to Matt for all the memorable pictures. Untold gratitude to the girls for being our transportation and support crew, and my sympathy to Lee’s injuries.

Now, I’ve got to get some extra sleep…got more riding to do this weekend!